Welcome to my spot on the Heir of Arcadia Blog Tour! 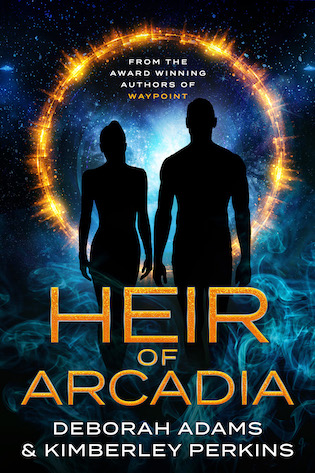 Synopsis:
Can Collins and Quinn call a truce long enough to survive?

Quinn’s hectic job as a special agent keeps her busy, but never busy enough to tamp out her inconvenient attraction to CEO billionaire Julian Collins. He is usually the biggest pain in her side, but he can also be recklessly charming. When Collins asks her to open a secret investigation into his company, she worries that extra time alone with him might test her resolve to stay away.

Julian Collins always dreamed of being on Arcadia, a fictional world from his favorite video game. But lately, he’s been seeing things from the game in real life. He feels like he’s losing his mind, and now is not the time to go crazy. His company is going to be split into a dozen pieces if he can’t discover the secrets hidden in the Special Projects division.

After three years of quasi-friendship, Collins and Quinn have honed arguing into a true art form. As far as he’s concerned, she’s off-limits, but also quick-witted and sexy as hell. She’s the perfect person for the job.

As Quinn and Collins delve deeper into their investigation, secrets will lead them to things no one on earth can explain. Will they discover that searing hot kisses can be even more fun than well-placed insults when a whole new universe is spread before them?

Initially, I was hooked on this book as soon as I read the synopsis. At first glance, I saw the words agent, mission, billionaire company secrets and we’re-just-friends romance and in my head, I said Yes! Let’s read this one.

And I did, I read it all in a matter of days. It’s a real page-turner from the start. We’re introduced to Jullian, who has taken over his father’s company after his death. People don’t take him seriously and that’s exactly what Jullian wants to prove. After learning about a secret division his father invested in is losing a lot of money, Jullian decides to take this situation in his hands.

He contacts his long-time off-limits best friends and with a favourable deal, both parties begin unraveling the mysteries. Quinn is a high-class agent who gets what she wants in the sneakiest way possible. She is strong and a great mother-like figure to Serah, Jullian’s sister. The relationship between the three is too cute, almost natural.

Things start to pick up once Jullian cannot distinguish between real life and his game life. Arcadia is a game that Jullian relies on to get sleep. But soon, he starts hallucinating visions of the game in real life and that’s when the story gets intriguing. These hallucinations, and the secret division, and the Arcadian game with a unique language take Jullian, Quinn, and their friends on a life-changing mission.

It’s not very easy to incorporate spatial structures, spatial technology, and inter-galactic themes but Deborah and Kimberly have done a great job with this story. The post-world technology, fast-paced game action, and inter-species communication is articulated flawlessly. Kudos to the authors who made up a distinctive Draconian language that is fascinating to read.

To conclude, I thoroughly enjoyed reading this book that is completely out of this planet. 😉 The love-hate relationship between the main characters, the trust-worthy friendship within the group, and the passion to solve the secrets make the book complete. I recommend this book for those who love virtual games, a space storyline, and a good number of plot twists.